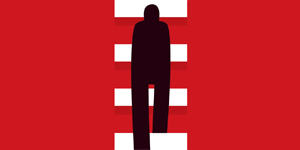 Audiovisual spectacle “186 steps [camp: reintegration]” was a part of “Saved From Mauthausen” exhibition organized by the Warsaw History Meeting House in May 2010.

The exhibition accompanied the promotion of “Saved From Mauthausen” tome presenting testimonies of prisoners during World War II in Nazi concentration camps of Mauthausen-Gusen system. The testimonies were collected and published under The International Mauthausen Survivors Documentation Project funded by the Austrian government.

The eponymous 186 steps of the “stairs of death” in Mauthausen quarry, which prisoners had to take daily can be understood as a universal metaphor for an existential crisis, redefining our understanding of suffering, freedom, youth or dignity. Authors face the matter of camp testimonies, seeking their own identity, vulnerability and survival skills.

More about the spectacle and the exhibition:

The event was realized with financial help of the City of Warsaw.